I believe that reporter Joe Mahoney is correct here: 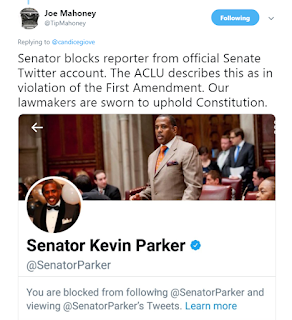 A state legislator would violate the First Amendment by blocking the media or constituents from his or her Twitter feed. Joe Mahoney also had a link on Twitter to a post on the ACLU website - Court Rules Public Officials Can't Block Critics on Facebook - which explains why State Senator Parker's action is unconstitutional. The President faced the same issue on Twitter and lost in federal court - Judge Rules Trump Can’t Block People on Twitter.

No one is above the law, especially elected officials. When this State Senator used Twitter to discuss state issues, his Twitter page became a public forum where viewpoint discrimination is not allowed. One benefit of social media is we can watch our representatives more closely, and we can't hold them accountable if they can simply block us from seeing what they are doing.

I hope the ACLU demonstrates a commitment to its roots as a free speech advocate and brings an action against State Senator Parker as soon as possible.

Posted by Jim Maisano at 4:30 PM No comments: 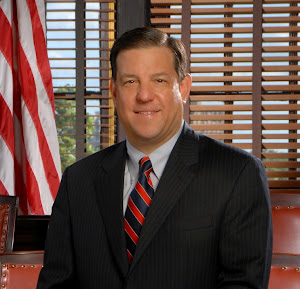